March 18, 2016
Beament Hebert Nicholson LLP was proud to sponsor and assist the Ontario Trial Lawyers Association ["OTLA"] with three volunteers on hand for the 2016 OTLA Cup in Windsor, Ontario. Derek Nicholson is the OTLA Cup Committee Co-Chair, Sig Pantazis is a member of that Committee and Jessica McClay was an organizer and volunteer. The OTLA Cup is an annual moot court tournament that Derek Nicholson has chaired or co-chaired for several years now. Mock court documents are prepared and students from law schools throughout Ontario including Queens, Western, Windsor, Ottawa and Osgoode Hall compete in teams coached for several months by local lawyers. Competitors have an opportunity to develop skills such as entering exhibits, referring to discovery transcripts, and eliciting viva voce evidence from witnesses. In addition to the three members of our firm on hand to facilitate the event, there were volunteers from local firms in Windsor, OTLA members including OTLA Board member Michelle Jorge, sponsors, coaches, competitors, witnesses, jurors, and the Honourable Justice Thomas Carey who graciously donated his Saturday to judge the students. [caption id="attachment_1278" align="alignleft" width="300"] 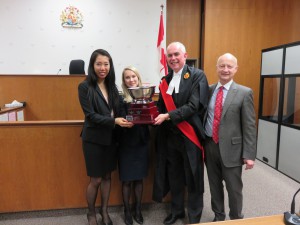 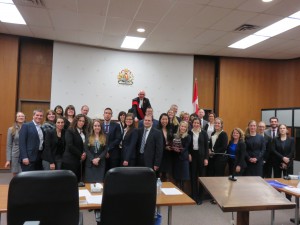 Thank you competitors and volunteers!![/caption]                 The jury had a very difficult task as each team was extremely well prepared and presented like seasoned litigators. The real prize was months of training resulting in practical knowledge and confidence it may take new lawyers years to attain, but only one team could claim the top prize. After the dust settled Jennifer Cao and Shayla Stein of Queen's University took home this year's trophy as best team. Other winners this year included: Beament Hebert Nicholson LLP congratulates this year's winners and competitors, and thanks the volunteers and sponsors that helped make this event happen. Very special thanks goes out to the University of Windsor Law School who acted as our local host. Events like these are important to provide practical courtroom training, and they are not possible without the help of a lot of dedicated individuals. We would like to thank everyone involved and look forward to seeing many of you next year!