A toast to my Dad, Bernard Gluckstein, on his 80th birthday -- it's easy to talk about Bernie. His interests and hobbies range from law to photography to golf and exercise guru; lover of wine, food, garage sales and odd collections.

His life can be described in order of his priorities; 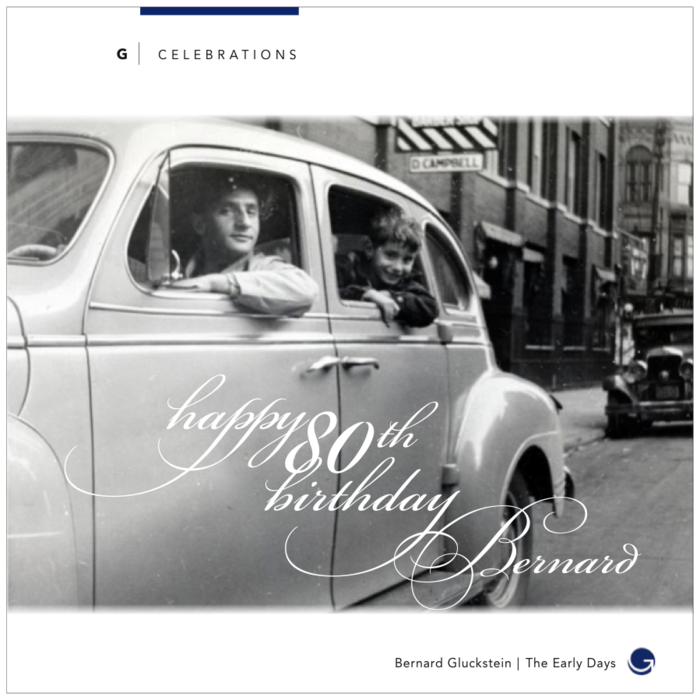 At age 11, my dad started working by selling pins, pennants and by 15, was driving a cab. His Father worked at Metro Cab, in charge of dispatch. He enjoyed the taxi work and meeting new people, a skill that is very apparent when you spend 30 seconds with my dad.

When my dad met my mom, on her first date my granddad said to her, "You're going to like this one." They married and then my sisters and I came along. He learned the new role of being a father while building his law practice. One of the best traditions that I had with my dad -- our annual family ski holidays, originally for the whole family but after a few cold winters, it turned into just father and son road trips on Spring Break.

The family expanded when my older sisters and I married; my parents became grandparents. For Dad, being involved in childcare activities was a renewal of being a father again. Today, ten grandchildren later, dad's the one planning major family gatherings, they are some of his most precious times of the year.

BERNARD GLUCKSTEIN graduated from Osgoode Law School in 1960 and was called to the Ontario Bar in 1962. He was the first class to complete the Bar Admission Course for the Law Society of Upper Canada (LSUC).

Although that explains how he got to law school, what's interesting is how he became involved in Personal Injury Law.

My father joined a firm called Shuber Bassman and quickly built a client base, making a name for himself by handling disputes that arose from taxi drivers. As word spread, soon many taxi drivers in Toronto were going to my dad for legal advice. Small claims issues soon led to injury cases and in no time, Shuber Bassman became Shuber Gluckstein. The firm under his leadership became synonymous to Personal Injury Law.

Praise for my dad grew. He took a "nothing case" -- where he should have lost badly or been shut out. With his imagination, he would shock the defence counsel and get a jury to give him a big award. He turned psychological injuries from auto accidents into a new practice area of law which has benefited the Personal Injury Bar hundreds, if not thousands, of times over. Honours and awards have followed his 54-year legal career.

Dad, in law, you are a leader. Not only have you paved new roads for others to follow like me, you have been involved and re-built the lives of thousands of accident victims who suffered serious injuries.

Dad, you truly are an icon and Canadian hero, in so many ways. Everyone who meets you is touched by your warmth, kindness, and overwhelming friendship.

We all wish for you to have continued health, happiness, enjoyment of life.

If you would like to send a note of congratulations to Bernard,
please send via "Leave A Comment" below.
-- Thank You

View All Our Team