The people injured in the Westboro bus crash have gone through enough. And although it could take years to settle all of their claims for compensation, it's not because the city wants to put up a fight. 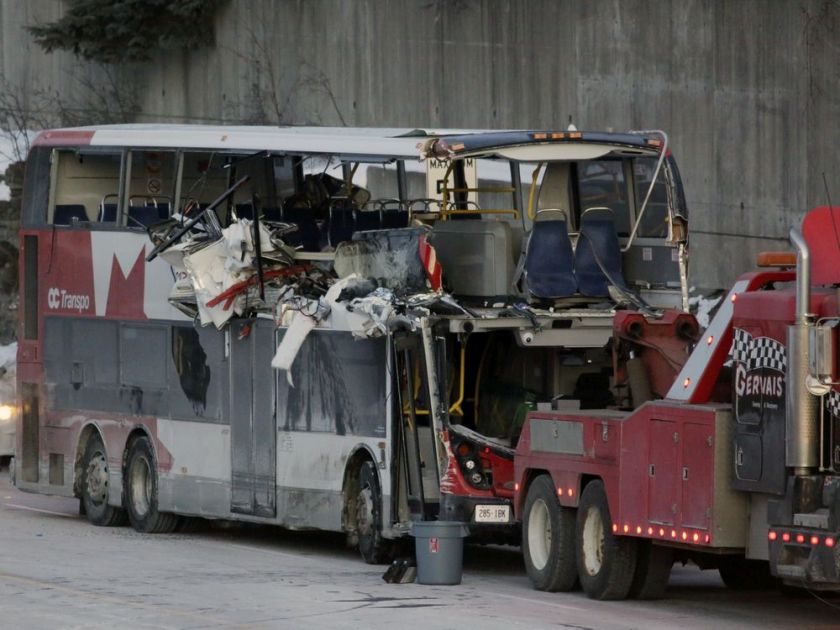 The OC Transpo bus involved in Friday's crash at Westboro Station was towed from the scene, revealing extensive damage, on Jan. 12, 2019. David Kawai / Postmedia[/caption] That's how Terry Shillington, the lawyer retained to represent the City of Ottawa, explained the municipality's approach to the lawsuits filed in response to the collision that left three people dead and dozens injured on Jan. 11, 2019. On Tuesday, the city released a memo from its solicitor David White to mayor and council, confirming that the city is accepting civil responsibility for the collision and the claims to compensate victims and families. This isn't actually new: according to the memo, it's a position the city has held since the crash, and has communicated to passengers and loved ones. However, it could use some breaking down so the non-lawyers among us understand its significance. Shillington emphasized two crucial points. First, the cause of the collision has no bearing on the resolution of lawsuits emerging from it. "If you're in a car accident, sometimes it's not clear who's at fault "¦ but if you're a passenger in your friend's vehicle, it doesn't matter which driver's at fault or what the issues are. You're a passenger, you didn't do anything wrong," he explained. "I know there's some investigations going on as to different issues that may have contributed (to the crash), but "¦ we don't have to get caught up in what caused it, because the plaintiffs as passengers get full compensation, no matter what." The second point to understand is that the civil litigation process is separate from the criminal proceedings involving bus driver Aissatou Diallo. While the city has been cleared of any criminal liability related to the crash, Diallo is facing multiple counts of dangerous driving causing death and bodily harm. But on the civil side, "The driver's covered by the city's policy," Shillington explained. "if the driver was 100 per cent liable "” which could very well be the case "¦ it doesn't matter." The city is facing 13 claims for compensation by Westboro bush crash victims and families, including a class-action lawsuit looking to represent all of the other passengers and people on the Westboro platform. It's also received another 18 notices advising that claims will be coming from other passengers. While responsibility for compensating these claimants may have been a foregone conclusion, the city and its counsel are being recognized for taking unusual steps to accommodate survivors as they move through the litigation process. Derek Nicholson represents Gwen Lambert and Lynn Ellis, two passengers seriously injured in the crash who've filed separate $6-million lawsuits.Both have received advanced payments from the city "” some of the approximately $3.5 million that's been dispensed to help injured passengers cover some of the pressing costs they're already facing."That's a good example of how the city's being very fair with these people, because that is not a usual thing," said Nicholson. "Usually the approach is the insurance companies think that if they give an advance payment, they're helping the plaintiff with their litigation. But that approach has not been taken on this file."So far, the city and their counsel have been very positive and helpful." It's an approach Shillington is planning to maintain in the months and years to come. And it will almost certainly take years to resolve all the claims related to the bus crash. "The problem is, especially the more seriously injured, they don't know the extent of their recovery," Shillington explained. "Some of them don't know whether they're going back to work, some of them don't know what kind of care they're going to need, so they're not in a position to settle." Getting to the end of this process could take four, five years "” that was the timeline for the majority of the lawsuits after the 2013 bus-train crash, on which the city also retained Shillington. More than six years later, one of those claims still remains unresolved. Anyone looking for compensation has two years from the date of the Westboro bus crash to file a claim. Shillington anticipates all of the 18 passengers who've put the city on notice will eventually advance lawsuits. "We don't want to rush anybody, and we're working collaboratively with all of the plaintiffs' lawyers to monitor with them their clients' progress,' said Shillington. "We don't want to be an impediment to the settlement of any of the claims. They've been through enough." As for what this will ultimately cost, it's impossible to quantify today. But, it's not just a matter of totalling up the value of all the claims "” currently in excess of $120 million, before you consider the $60-million class action lawsuit. Because the value of the claims is still being determined as plaintiff recovery continues and their future costs estimated, plaintiffs' lawyers will typically ask for more than they think their clients will need, Shillington explained. "Some of the claims, they might get paid close to what they've asked for. But I would say generally, that's just an upper number, and then we work on what is the fair and reasonable compensation below that."

Article written by Taylor Blewett of the Ottawa Citizen.