A woman whose legs were crushed when a double-decker bus crashed into Westboro Station last month is suing two levels of government for not requiring seat belts on public transit.

Gwen Lambert is the co-plaintiff in a $6.375-million lawsuit filed Thursday against the City of Ottawa, Province of Ontario, OC Transpo and the bus driver, Aissatou Diallo. The allegations haven't been tested in court. 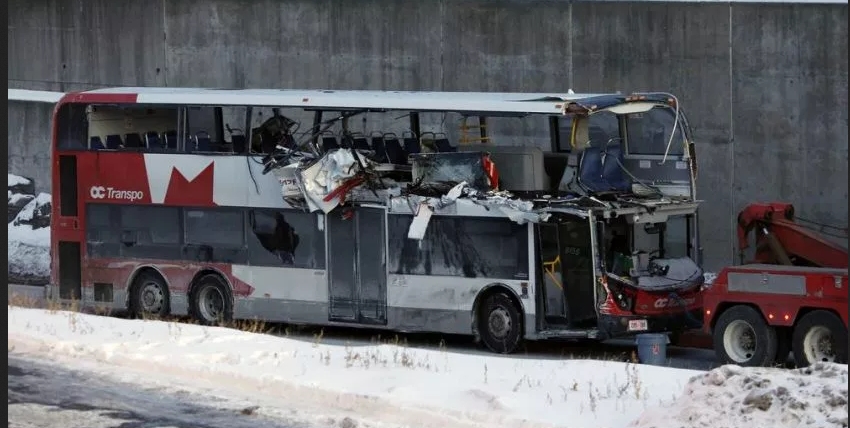 The OC Transpo bus involved in Friday's crash at Westboro Station was towed from the scene, revealing extensive damage, on Jan. 12, 2019. David Kawai / Postmedia[/caption] According to the lawsuit, Lambert was seated in the top front bench seat of the westbound bus on Jan. 11 when it crashed into the bus station. The injuries to her legs "will preclude (her) from ever walking properly again," the suit says. On top of the physical injuries, Lambert is coping with psychological impacts from being in the crash. The suit says Lambert's friend sitting next to her on the bus died. Lambert suffered nervous shock. The suit doesn't say which of the three deceased passengers was beside Lambert. The crash killed" Bruce Thomlinson, 56," Judy" Booth, 57, and Anja Van Beek, 65. All three were passengers on the bus. Paramedics transported Lambert to the Queensway Carleton Hospital after the crash. She went through "extensive surgeries" that required pins, plates and rods in her legs, and she won't be able to walk for the first year following her injuries, the suit says. The suit says Lambert's home isn't suitable for her to live in right now. The home will require modifications or she might need a new home that is more accessible, the suit says. As a federal public servant, she won't be able to complete additional years of service and increase her pensionable earnings, the suit says. The suit says the city and Transpo failed to have seat belts on the buses "despite the fact that it is standard knowledge that seat belts save lives and injury." The province is accused of not requiring transit systems to have seat belts. Lawyer Derek Nicholson, who's representing Lambert, said authorities should be considering seat belts for public transit buses, especially since people often are injured when a bus stops suddenly. Seat belts might result in fewer passengers being allowed on a bus, but Nicholson said it comes down to a choice for transit operators: "Safety, or how many people can be transported." The suit also accuses the bus driver for not operating the bus properly and the city and Transpo for allowing her to drive the bus. "She was not fit and competent to drive a double-decker bus as was evidenced by her several accidents driving buses in the preceding year," the suit says. It has been reported that Diallo was allegedly involved in two previous collisions prior to the crash at Westboro Station. The city hasn't publicly disclosed information about the driver or her driving history. The other plaintiffs in the suit are Lambert's son, two sisters and brother. The suit alleges the family members have lost companionship with Lambert because of the crash and have accumulated out-of-pocket expenses. The municipal and provincial governments weren't commenting on the allegations Friday. "The City of Ottawa has no comment on the case while it's before the courts," city clerk and solicitor Rick O'Connor said. "As the question makes reference to a lawsuit it would be inappropriate to comment at this time," Ministry of Transportation spokesman Bob Nichols said in an email. A separate $60-million proposed class-action lawsuit has also been filed in relation to the bus crash. Ottawa police are investigating the cause of the crash.

Article written by Jon Willing of the Ottawa Citizen.